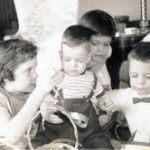 My brother Frank is now in a hospital bed at the Karmanos Cancer Institute, Detroit, Michigan.

Frank devastated from effects of Cancer and the harsh treatments that come with it.

This will be my second sibling to die of cancer.

And yes our hearts are broken.

As my family holds vigil around Frank’s bed,with his beautiful wife and daughters never leaving, I cannot help but think about my own relationship with Frank. Where we have been and our likes dislikes and common threads.

Frank is five years older than me.

From a very early stage Frank was a grape soda and Bonanza kinda guy and I was more of  a Bewitched and Vernors ginger-ale kind of guy.

Just the other day in the hospital on the TV  in Frank’s room were the western heros of Bonanza on TV. 50 years later watching the same shows that kept us entertained as children.

Frank was a guy by all appearances that fit the bill, he was neat as a pin as a boy and all the way through adult hood. He was that Brylcream guy that always held his hair to the side.

In contrast I was/am the outside the lines kind of guy.

I used to love to make Frank laugh,  as he would try to edit any outrageous behavior or commentary of mine at the same time would crumble in laughter. And after several minutes of laughing with tear stained cheeks he would say something like Bill you really should not…..

He on the other hand was a man whose gift was also his curse- he was a man that felt and cared more than anyone I know-it would frustrate him if things could be better. If the potential of a situation was not met – if things were not what they were supposed to be or could be -Frank felt it.

Frank cared and he loved.

I am aware of something greater than all of us right now.