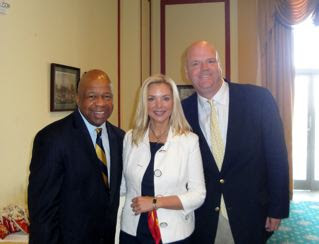 Congressman Cummings, Holli Thompson, Bill Couzens at the showing of Healthy Town Detroit at the Rayburn Building on the Hill July 2, 2010

Bill Couzens, Founder of Next Generation Choices Foundation, produced and directed Healthy Town–Detroit in his first cinematic effort. Known for their Less Cancer and Healthy Town campaigns, this new effort was well received at its premier in Middleburg last night.The foundation’s first project was to reduce harmful pesticide exposures in Virginia Schools. That effort was recognized for its collaboration with the state on recommendations to reduce pesticide drift from health effected communities – primarily schools. Driven by evidenced based science, Couzens was instrumental in educating Virginians on the risk to children of pesticides in their environment. The work of Less Cancer, and now Healthy Town, has raised awareness for prevention.