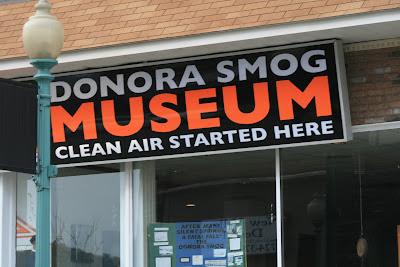 Author and scientist, Devra Davis, PhD, MPH, will be speaking at the Donora Municipal Building, 603 Meldon Avenue, in Donora, Pennsylvania, on Monday, October 20, 2008, from 1:00 to 2:00 PM, disclosing new information from recently unsealed records on the full scale and causes of that town’s deadly pollution.

There will be a question-and-answer period with Dr. Davis and a book signing of Dr. Davis’ award winning book When Smoke Ran Like Water. A National Book Award finalist, Dr. Davis’ most recent work, The Secret History of the War on Cancer, has caught the attention of readers around the world.

In her book When Smoke Ran Like Water, Dr. Davis confronts the public triumphs and private failures of her lifelong battle against environmental hazards. Readers are provided a window into the author’s earliest memories, family accountings of the five deadly days along the Monongahela River in Donora, Pennsylvania.

The ‘smogs,’ as they came to be known, made regular appearances in the spring and fall in Donora; however, the smog of the last week of October 1948 was different. An inversion layer of descending cold air prevented the rising exhaust fumes from steel mills and zinc smelting plant from being dissipated. Instead, over the course of five days the smog created an overpowering, deadly-blanket, leaving 20 people dead and over 7,000 either sick or hospitalized.

Dr. Davis is the Director of the country’s first Center for Environmental Oncology at the University of Pittsburgh Cancer Institute. Dr. Davis is also a Professor of Epidemiology at the University of Pittsburgh’s Graduate School of Public Health. Among her many accomplishments, Dr. Davis was appointed by President Clinton to the U.S. Chemical Safety and Hazard Investigation Board in 1994, served at the National Academy of Sciences, and a member of the team awarded the Nobel Peace Prize for research on climate change i2007.

Dr. Davis’ talk is open to the public.