Tom is a graduate from the University of Michigan, represented the United States at the 1976 and 1980 Summer Olympics and was one of the original seven members of the 7-Eleven Cycling Team. He was the 1987 USPRO national road champion and the 1981 US professional criterium champion.

Schuler is a retired American professional road bicycle racer and founder of Team Sports Inc., a sports management company in cycling, mountain biking, triathlon, and roller blading. Since 2006, he has been team manager for Targettraining, a UCI Continental team riding USA Cycling’s national racing calendar circuit, and Zoot Sports Triathlon Team. In 2009, he was general manager of Team Type 1, the Timex Multisport Team and the Zoot Ultra Triathlon Team.

Tom said, “Split the Mitt for Less Cancer is one of those rare cycling events that delivers on the promise as a first class experience.
From picturesque scenery and safe roads to warm camaraderie with fellow cyclists who are riding together with the common goal of cancer prevention. This event is truly a powerful cycling win-win for every participant that deserves your consideration.” 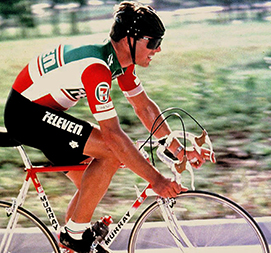