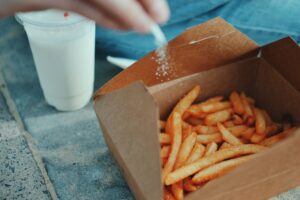 We know that the bag of chips or giant soda we slam down at the beach isn’t good for us. From the week’s worth of sugar to transfat to the high-calorie count, junk foods are obviously junk. But a deeper level, many of these foods also include potentially harmful additives that are banned in other countries but approved for human use in the US.

It may not be easy, but avoiding toxic food ingredients in common processed food can help lower your cancer risk. It takes effort to stay vigalent, because these ingredients are in many foods and, somehow,  the FDA is cool with it.

Aspartame is an artificial sweetener that’s common in many sodas and sugar drinks. It was invented and synthesized to add sweetness to food and beverage products without contributing as many calories as sugar. Despite years of suspicion and a recent study that confirmed the ingredients caused cancer in rodents, the FDA continues to improve its use.

Aspartame isn’t the only likely carcinogen allowed in food. To varying degrees, dozens of food ingredients and additives are likely contributing to individuals developing cancer.

The EPA and other organizations have noted acrylamide as a likely carcinogen and the FDA itself has recommended avoiding processed foods with high levels of acrylamide. Acrylamide is used as a whiten agent and is non-nutritive; it’s a toxic food ingredient added simply to make certain foods appear lighter.  Some of the most common foods with this ingredient are:

Also known as PAHs, polcyclic aromatic hydrocarbons aren’t technically a food ingredient. Instead, PAHs are created in the smoke of grilled or smoked foods. That means they aren’t limited to red meats and are just as likely to be found on fish or poultry prepared over an open flame.

HCAs are exclusively found in red meats and are one of the reasons that almost any level of red meat consumption increases your risk of developing cancer. HCAs are formed during the preparation process. Certain amino acids and sugars mutate at very high temperatures. The mutation is enough to genetically alter these molecules to develop HCAs. HCAs are especially high in burned or charred bits of red meat.

What percentage of cancer is caused by food?

Avoiding these food ingredients and following a healthy diet can lower your risk of cancer by 10-20%. Diet is just one of the important risk factors we can control. Eating healthily, exercising, and avoiding alcohol and tobacco products can help prevent cancer and several other lifestyle diseases like obesity and cardiovascular diseases.

Be a part of Less Cancer; learn about the National Cancer Prevention Workshop.