National Cancer Prevention Day first came about through a House of Representatives resolution on February 4, 2013, which states that work to prevent cancer impacts human health, the environment, and the economy. The Resolution was first introduced by Representative Steve Israel, Co-Chair of the House Cancer Caucus. At the time Steve Israel said, “There are far too many who have been touched by cancer, both directly or indirectly. Today on National Cancer Prevention Day, we commit ourselves to prevention and reducing our risks as much as possible through healthy lifestyles and clean environments. Less Cancer has been a true partner in this fight, and I applaud them for that.”

National Cancer Prevention Day is observed annually on Capitol Hill with cancer prevention experts and legislators, students and others in a program sponsored by Less Cancer. Bill Couzens, Founder of Less Cancer expressed, “I realize that cancer prevention must be more than an idea, but rather real world action that saves lives and prevents the many types of suffering that come with both the disease and its treatment.” Since the founding of National Cancer Prevention Day, it has developed into a critical national forum, attracting the best leading experts connecting science with policy for action.

Our recipe for less cancer is straightforward and focused. Our core activity is to educate the public about where cancers come from and how they can be prevented, so they can make informed decisions. We also work to educate policy makers so they can, in turn, protect the public. Another part of our focus is that we carefully vet all of our corporate sponsors, so that we are in no way associated with companies that may be contributing to the very cancer-causing activities we are fighting.

Education includes everything from alerting people to the dangers of indoor tanning and e-cigarettes, to harmful and cancer causing chemicals that can be found in consumer products. As an organization, we are committed to seeing regulation that protects consumers from those toxins. We also would like to see the regulation of e-cigarettes for their potential to hook the next generation on tobacco. Growing evidence about e-cigarettes and their health risks shows that we need to do all we can to prevent any potential use of tobacco, responsible for over 480,000 deaths per year in the United States.

Our commitment going forward is to raise the bar on human health in lifestyles and clean environments. Several years ago, we joined forces with the Johns Hopkins Bloomberg School of Public Health for a social media program called the #9minutemeal to promote quick and healthy recipes that can be made at home as a way of engaging Americans in reducing cancer risk.

Less Cancer’s efforts to protect the public is unlike any other organization. We represent those who have suffered many losses from cancer. We strive to prevent cancer today and for future generations.

Learn More About Us 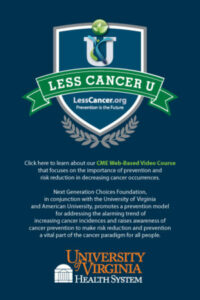 LET’S FIGHT CANCER WITH A FOCUS ON PREVENTION

Less Cancer’s work to raise awareness about health and environment spans a wide range of issues, including specific contaminants, pollution sources, and healthy lifestyle choices, such as diet, exercise, and nutrition. While we work to protect all communities, our approach is particularly relevant to at-risk populations, such as families and children in low-income communities. Our ultimate goal is to raise awareness of prevention and reduce incidences of diagnosed cancer in all people.
— Bill Couzens, Founder, Less Cancer