Later this month,  Blake Krueger, the former CEO of Wolverine Worldwide will be inducted into the Junior Achievement West Michigan Business Hall of Fame. The Junior Achievement of the Michigan Great Lakes organization is recognizing Kruger for being an outstanding role model to young people. 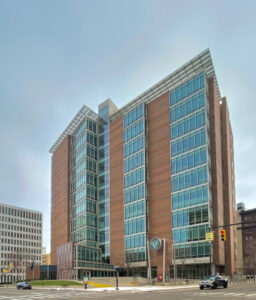 They should have done more research.

Krueger is only recently retired from his long-time role at Wolverine, the company responsible for polluting a 25-square-mile area of Kent County near Grand Rapids, Michigan. The footwear and apparel company knew about its pollution and its impact on the area’s groundwater and did nothing to solve the problem. Regulators discovered the PFAS chemicals during an investigation in 2017.

Wolverine Worldwide made more than $2 billion in 2021 and made several high-profile acquisitions under Krueger. The company has largely washed its hands of the the PFAS debacle. As reported by MLive, many Grand Rapids and Rockford businesses have largely forgiven Wolverine’s toxic pollution. Since the chemical plume was discovered, Wolverine, led by Krueger, has actively fought blame and shirked responsibility for both the pollution and clean-up.

Documents show that Wolverine knew about the dump for at least twenty years after being informed by 3M about the presence of PFAS in some of the chemicals used by Wolverine. Wolverine actively restricted groundwater testing or water studies on land it used to dump waste materials, even barring a golf course development deal until 2015. Krueger was caught lying about his knowledge of PFAS on the site in 2016 when 3M released records of their 1999 meeting.

Wolverine has yet to undertake underground water treatment on the site despite an EPA order to do so. The company installed the required equipment years ago but has yet to start the project.

Another Wolverine site was discovered recently and is being investigated by state and federal environmental agencies.