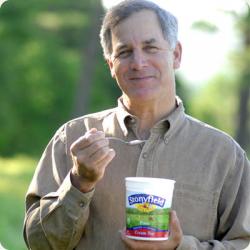 Gary Hirshberg, Co-Founder and Chariman of Stonyfield Farm,will be speaking for Less Cancer a campaign of Next Generation Choices Foundation on Thursday, October 18, 2012 the Music Hall Loft at 131 Congress Street, Portsmouth, New Hampshire. The event starts at 5:30pm please email info(at)lesscancer(dot)org for more information or reserved seating. Miles O’Brien to do introductions.

Gary Hirshberg is the husband of freelance writer Meg Hirshberg and the father of three yogurt eaters. Hirshberg is the co-founder and chairman, author of Stirring It Up: How to Make Money and Save the World, and co-author of Label It Now: What You Need to Know About Genetically Engineered Foods.

Gary is a frequent speaker on topics including sustainability, climate change, the profitability of green business and organic agriculture. He also advocates for change in national food and agriculture policies, including those regarding the labeling of genetically engineered foods.

During Gary’s 28 year career as Stonyfield’s president and “CE-Yo,” the company grew from a seven-cow organic farming school to $360 million in annual sales, by consistently producing great-tasting products and using innovative marketing techniques that blended the company’s social, environmental and financial missions.

In 2001, Stonyfield entered into a partnership with Groupe Danone, and in 2005, Gary was named managing director of Stonyfield Europe, a joint venture between the two firms with brands in Canada, Ireland and France. In early 2012, Gary handed off his president and CE-Yo roles to mission-driven business leader Walt Freese.

Prior to Stonyfield, Gary directed the Rural Education Center, the small organic farming school from which Stonyfield was spawned. Before that, Gary had served as executive director of The New Alchemy Institute, a research and education center dedicated to organic farming, aquaculture and renewable energy.

In 2011, President Barack Obama appointed Gary to the Advisory Committee for Trade and Policy Negotiations, and Gary became a co-chair of AGree—a food and agricultural policy effort launched by eight of the world’s leading foundations.

Less Cancer Chairman, Tom Sherman, MD said, “we are very much looking forward to Gary speaking. Like Stonyfield Farm, the work for Less Cancer has always been about healthy food, healthy planet and healthy people.”